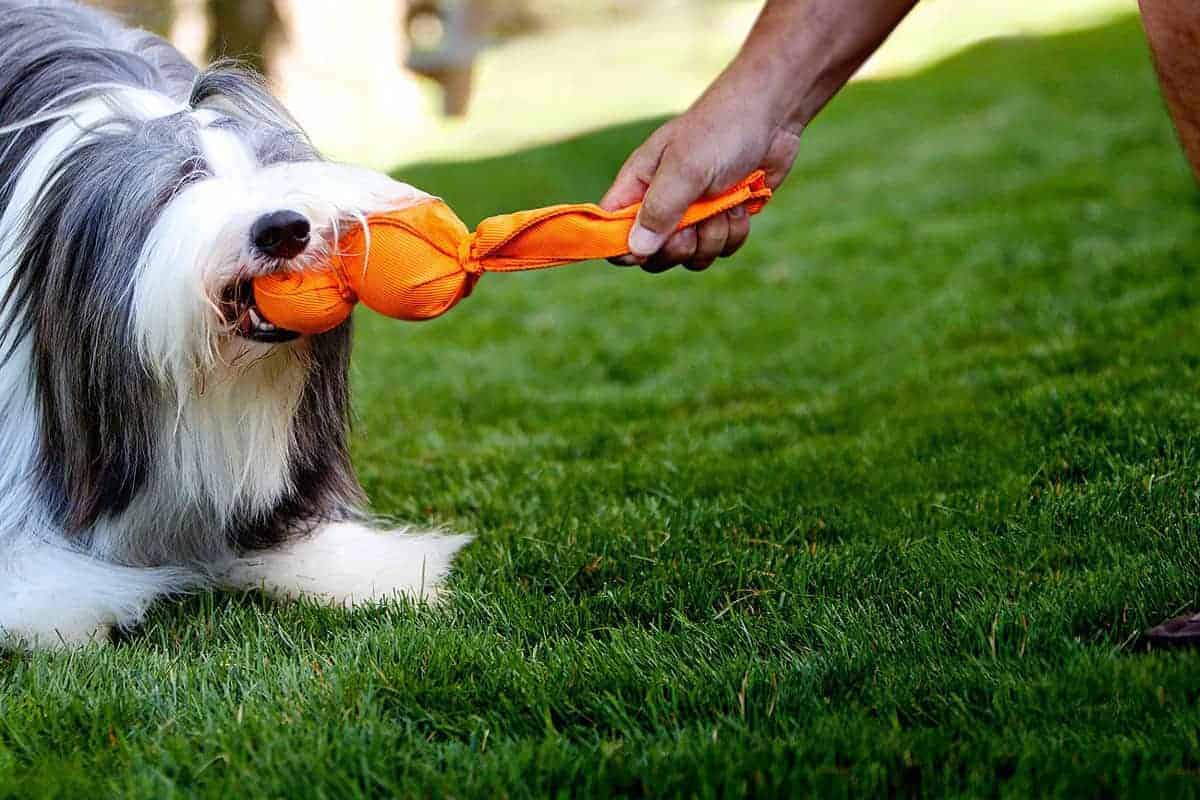 When we ask our dog to “drop” something, we are expecting him to let go of whatever he is holding in his mouth. Sometimes we’d like our dog to let go of a toy that we are playing with to keep him from getting overly excited. Other times, our dog might find something that could be harmful for him to play with or eat, and we need him to let go before he hurts himself or makes himself sick. Drop is an extremely important skill, but it can also be a tricky to get some dogs to oblige depending on their experiences with Drop in the past.

The “traditional” way to teach Drop was to try to physically remove an object from the dog’s mouth while saying the cue at the same time. While the end result was that the human was usually able to get the object that s/he wanted, that method of training doesn’t actually teach the dog that you’d like him to let go of what he’s holding onto, nor does it encourage the dog to be a willing participant in the activity. Imagine that you were in your dog’s position and someone bigger and stronger than you came along and tried to wrench your favourite video game out of your hands every time that you sat down to play. What would you do the next time that you saw that person coming towards you while you had your game? Most people would do one of two things: we would either tighten our grip and hope that we could outlast the other person this time, or we would move away and hope that the bigger person doesn’t find our hiding spot. Dogs do the same thing. Dogs that have things forcibly taken from them will either tighten their grip on their prize and get extra defensive when someone approaches or they will take off running and turn it into a game of Catch Me if You Can.

The good news is that it doesn’t have to be that way. There is an easy way to teach Drop as part of a trading game. My dog relinquishes the object that I want, and he gets a yummy treat or an equally exciting toy in return for his participation in the game. By training this way, it’s clear to your dog which behaviour is being rewarded (letting go of what’s in his mouth) and he learns to be a willing participant in the game because he understands that there is something good in it for him. Both sides win!

Before you start training, make sure that your supplies are well organised and within easy reach. It is usually easiest to use a toy and some treats to start your training. Make sure that toy that you choose to use is long enough for you to let him grab one end of the toy and keep your fingers safely out of the way of his teeth! You will also need to have some treats nearby, and you will need to decide on the word that you want to eventually use as your cue for Drop. Many people use the word “drop,” but others use “trade,” “let go,” or “swap.” You can choose any word that you’d like – just make sure that it’s one that you’ll remember later!

When you are ready to start your training session, wiggle your toy along the ground to get your dog interested in chasing it and grabbing onto one end of it with his mouth. Some dogs are very interested in playing with toys and will grab on right away. Other dogs need to be enticed a little more before they are willing to try the game. Be patient and make sure that your dog gets a good grip. When you are sure that your dog has a good grip, present a treat right in front of his nose. As soon as you feel him start to loosen his grip on the toy, say your cue word and then praise him and give him the treat to eat once he has fully let go of the toy. Once he is done eating, present the toy and start wiggling it again for another repetition of the game.

If your dog enjoys playing with toys more than eating treats, you can play this game with two toys instead. Wait until your dog has a good grip on the first toy, and then present the second one and wiggle it along the ground. Say your cue as your dog lets go of the first toy, and then reward him by letting him play with the second one. If your dog is more food-motivated, you can use a large bullystick or bone as the first item. When he is holding onto that, present a treat in front of his nose. Say your cue as he stars to drop the first item, and then give him the treat as his reward for letting go of it completely. If you are having trouble with this game or if your dog is guarding a toy/food item from you, you will want to find a certified trainer that specialises in positive reinforcement to help.

PrevPreviousMaking Your Dogs’ Behaviour Work for You
NextDoes Your Pet Have Arthritis?Next