Should You Play Tug with Your Dog? 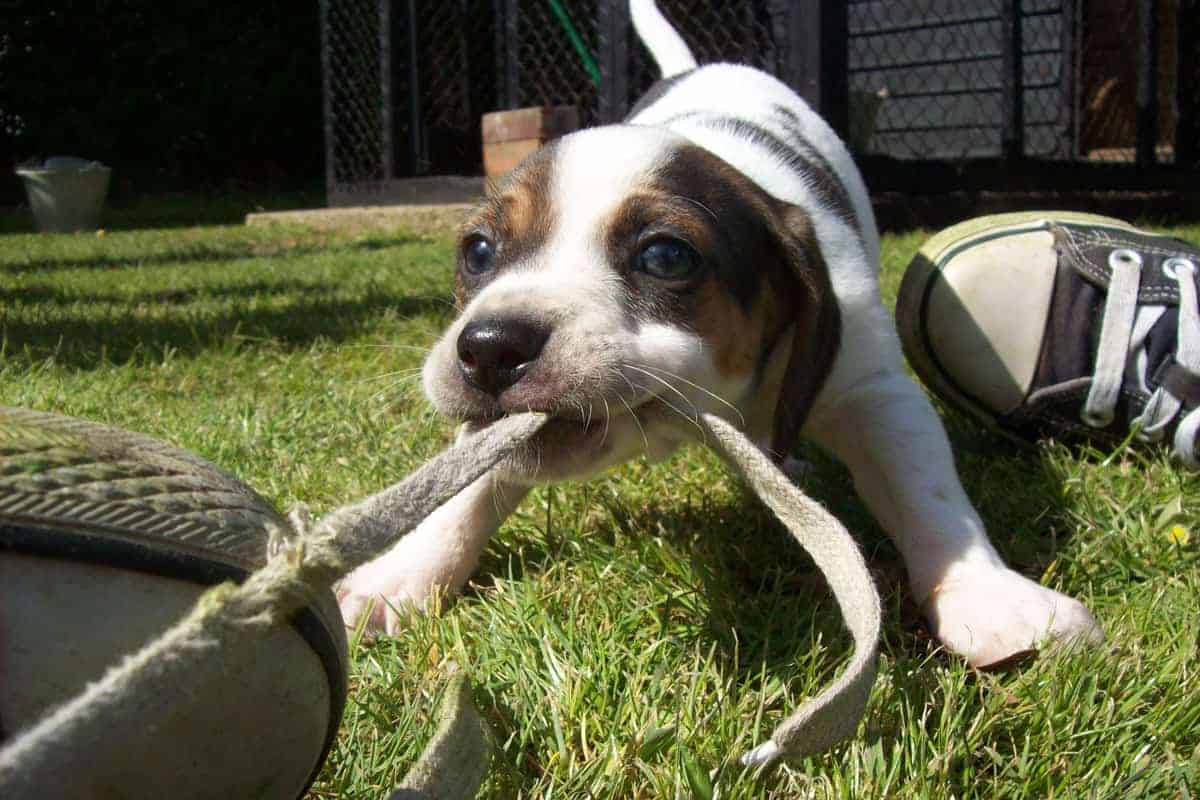 In the past, there has been some debate about whether or not we should play tug with our dogs. The thought was that high energy games like tug were dangerous and encouraged dogs to bite.  It’s true that Tug is a game that can get a little too wild without proper rules and structure, but it can also be a great way to expend some of your dog’s energy, work on his self-control in exciting situations, and just have fun!

This is one of the most important components of playing tug with your dog. Many dog owners run into problems while playing tug simply because they have chosen the wrong toy to play with. Dogs naturally grip and re-grip their bite on the toy while they are tugging. If you have chosen to play with a toy that’s too small, there’s a good chance that your dog might accidentally re-grip on your fingers while he’s playing.

Try to find a toy that allows for at least 6-8” between your dog’s mouth and your hand. By choosing a longer toy, you will give yourself space to keep your fingers away from your dog’s mouth. Rope toys work really well, as do fleece toys or bungee toys that are specially made to lessen the impact on you and your dog when playing. Also, if your dog has a Tug toy that he LOVES, keep that toy in a special place and only bring it out when it’s time for you to play with him. It will make playing with you much more exciting if your dog also gets to play with his favourite toy at the same time!

As previously mentioned, Tug is a game that needs clear and consistent rules in order to keep it fun for all involved. Most dogs really enjoy a good game of Tug, and it can be easy for them to get carried away. In order to prevent mistakes and save your fingers, here are some rules to keep in mind:

1. Your Dog Can’t Grab the toy from You.

This is the first self-control exercise built into the Tug game. Your dog can see the toy in your hand, and he knows that something really fun is about to happen. BUT, he has to wait until you’re ready to offer him the toy. If he tries to grab it from you before you’re ready, the toy gets put away for 20-30 seconds so that your dog has a chance to settle down and start thinking again. After that short break, bring the toy out and try again. It can be helpful to use a specific phrase or cue to let your dog know that you’re ready to play with him. Try saying “Get it!” or “Take it!” as you offer the toy so that your dog knows it’s ok to start playing.

2. Your Dog Needs to Let Go of the Toy When Asked.

This is the second self-control exercise built into the Tug game. Of course your dog wants to keep hold of the toy, but he should understand a Drop cue so that there is a way to end or pause the game when you need to. One of the easiest ways to teach Drop is to exchange the tug toy for a piece of food. Hide a few treats in your pocket before starting the Tug game with your dog. Once you’ve gotten him to play and he has a good grip on the toy, bring a piece of food out of your pocket and hold it in front of your dog’s nose. As soon as you feel him start to let go of the toy in his mouth, say “drop” and then let him have the piece of food. It’s a win-win situation – you get the toy and your dog gets the food! With some repetition, your dog will start to let go of the toy when you say “drop” in anticipation of something good. When you get to that point, you can reward your dog for dropping the toy by continuing to trade him for a piece of food, or you can give him back the toy and start a new game of Tug!

3. Human Skin and Clothing is Off Limits!

Your dog is not allowed to put his mouth on your hands or your clothing when he is playing Tug. For most dogs, this happens accidentally while they are attempting to adjust their grip on their toy. If your dog makes a mistake, let go of the toy and/or ask him to “drop” if he understands that cue (you can trade him to letting go of the toy if he hasn’t had enough experience with Drop yet). Take a break for about 30 seconds to make sure that your dog settles down enough to think again, and then try again. If you find that your dog is making this mistake more than once while playing with you, you might need to find a longer toy, consult with a trainer, or take more frequent breaks as explained in the next rule.

This is one of the most common mistakes that can occur. Tug is a very exciting game for most dogs and the longer that the play session lasts, the more likely your dog is to become overly excited. When dogs get that excited, they temporarily stop thinking about anything besides yanking on that tug toy and they get more careless with where and how hard they bite at the toy. It becomes really easy for them to make the mistake of putting their mouth on your hand! To help them avoid that problem, try interrupting the play session more often. Invite your dog to tug for about 20 seconds maximum, and then ask him to Drop. Wait a few seconds to make sure that his arousal level is one that you’re comfortable with, and then try again. Some dogs are able to calm down very quickly each time that you ask them to take a break. Others need more time. Make sure that you are paying attention to the needs of your individual dog and adjusting your play style accordingly!

Who wants to play a game that you’re guaranteed to lose every single time? There’s no fun in that or much incentive to continue playing in the future. It’s ok to let your dog “win” and pull the tug toy out of your hands on occasion. Letting him win will do wonders for his confidence and ensure that Tug continues to be one of his favorite activities.

Playing Tug requires clear rules and structure in order to make the game safe and fun for all involved. However, once you accomplish that, Tug will likely become one of the most fun activities that you and your dog can do together!